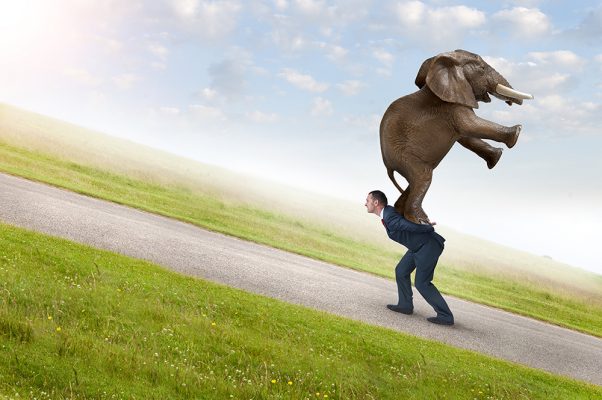 Markets have rallied from support last week but gave back half those gains on Monday’s session.

There are few pockets showing positive action. This past week, weaker global markets have also rallied from support levels. VEU, EEM, and EFA all tested critical support levels from their August lows and encountering trendline resistance here. With ‘Trade Tariff’ rhetoric in background we must keep our eye on short term developments that can have broader spillover damage for the US and other markets as we’ve been warning about for weeks here. For all clear signal, they need to overcome major trendline resistance in coming weeks.

US Tariffs: The U.S. reportedly will slap tariffs on $200 billion worth of Chinese goods, perhaps as soon as Monday. That’s on top of the 25% Trump tariffs on $50 billion in Chinese imports. But the U.S. is likely to set a 10% tariff rate on the $200 billion, not 25% as he has also mulled. That could mute negative stock market reaction.

China will not be able to match Trump tariffs dollar for dollar going forward. Beijing has vowed to impose tariffs on some $60 billion worth of U.S. goods if the U.S. goes ahead with duties on $200 billion more of Chinese wares. China could restrict sales of components, equipment and materials key to U.S. manufacturers’ supply chains, the Wall Street Journal reported Sunday. That would affect big U.S. multinationals such as Micron Technology and Apple, even without direct tariffs.

China also likely would back out of new U.S.-China trade talks if the latest Trump tariffs kick in. Following a meeting between EU chief negotiator Malmstrom and US Trade Representative Lighthizer, both sides indicated a partial trade agreement was possible by early November while a full trade deal could still take further time to hash out.

Meanwhile, the U.S. and Canada ended the week with no apparent progress on tariffs. Lower-level officials have negotiated in recent days, Freeland told reporters Tuesday in Ottawa. She underscored Canada’s insistence that it won’t bow to all demands. “Any negotiator who goes into a negotiation believing that he or she must get a deal at any price — that is a negotiator who will be forced to pay the maximum price for that deal,” she said. “No deal is better than a bad deal.” Canadian officials are warning that they’re prepared to see the next deadline pass if they don’t get a Nafta deal that they can live with, according to two sources. The Canadians need effective dispute settlement provisions in antidumping cases, and certainty to avoid misuse of national security investigations, under which Trump has applied tariffs, one of the people said. Sticking points in talks include dairy, where the U.S., facing a supply glut, is seeking a bigger cut of Canada’s protected market. In exchange, Canada is hoping to preserve some form of anti-dumping panels contained in Chapter 19 of the North American Free Trade Agreement, and an exemption for Canadian cultural industries.

Other American demands include longer intellectual property and pharmaceutical patent protection and a higher threshold for duty-free shipments across the U.S.-Canada border, none of which the Canadians have signaled are deal-breakers.

It’s unclear what will happen if it becomes impossible to publish text of a deal by Sept. 30. The countries could extend talks, but that means Mexico’s president-elect, Andres Manuel Lopez Obrador — who takes office Dec. 1 — will have to be the one to sign the new agreement.

The scale of the new Trump tariffs could lead to a range of economic outcomes, UBS economists believe. They’ve predicted GDP growth could fall to 1.6% in the fourth quarter with 10% tariffs and may bounce back to 3% in the first quarter. Tariffs of 25% could slow growth to less than 1% in Q4 and lead to a more persistent slowdown.

Oil prices jumped as fears increased regarding supply issues in Venezuela and Iran. The International Monetary Fund joined the voices cautioning Britain that crashing out of the European Union without a trade agreement would inflict substantial damage on the U.K. economy.

Europe’s markets trimmed their morning losses in afternoon trade. Frankfurt’s DAX was down 0.3%. The FTSE 100 in London and CAC-40 in Paris each dipped less than 0.1%.

Economic Reports: The New York Federal Reserve reported that manufacturing growth slowed sharply in September, sending its Empire State Manufacturing Survey to a reading of 19 for the month, down from 25.6 in August and below views for a tally of 23.

New orders, shipments, inventories and employment numbers were all positive across the survey, but below August’s pace of growth, the report said. First-time jobless claims rolled in at 201,000, which was 4% fewer than expected and the lowest level in almost 49 years.

The Philadelphia Federal Reserve’s business outlook came in at 22.9, above estimates for 19.6.

1. On Tuesday, housing market index future. Markets reaction to them is important to understand.

Keep a close eye on Housing reports to understand health of this crucial sector. It has lead historically showing weakness before general market weakness.

Sector performance in Year to Date:

Some of them are EC, SIVB, RAVN, ADBE, HQY, NVDIA, VEEV, ALGN